Winning the War for Talent 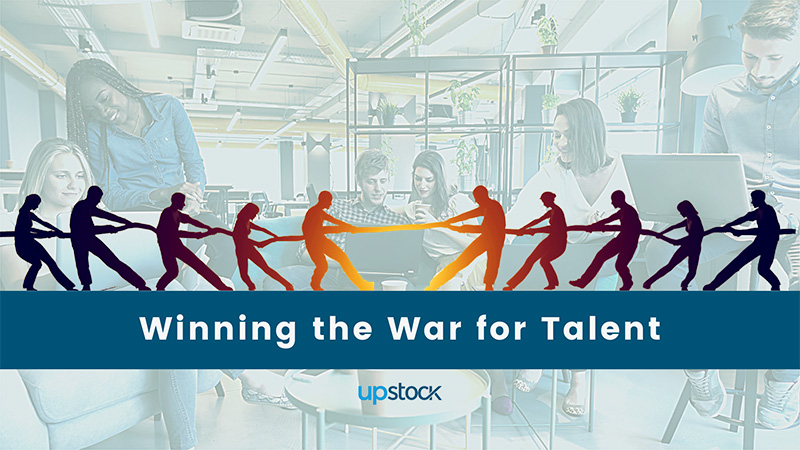 A war is being silently fought on a global battlefield for one of the most important resources in the world—human capital.

Today workers want more than just a paycheck. Successful businesses need to engage and motivate their workers, and often money is not enough. Companies are now using equity as a motivating factor in engaging and retaining talent. Today, we are talking about the war over the experts and visionaries that drive companies to success. The casus belli is the shortage of human talent, the belligerents are companies, and the battlefield is global.

This so-called “War for Talent” was first observed and coined as a term in 1997 by McKinsey & Company to refer to the intensifying competition for human capital. In this competitive arena, the fight for talented individuals is not limited to the attraction and recruitment of talent, but also the retention of key employees against poaching attempts from competing companies and organizations.

While the intensity of this war fluctuates over time, it has been present and lingering since before the war for talent was coined. These fights become particularly intense during periods of labor shortages. Now, fueled by the mass exodus of workers and employees during the Great Resignation, the current need for talented and skilled individuals has become even more pronounced.

The Bureau of Labor Statistics found that around 4.3 million workers quit their jobs in August 2021, the highest recorded number so far since December 2000. The layoff and discharge rate, on the other hand, remained more or less the same within the applicable period. This indicates that separations from work have largely been worker-initiated.

The Great Resignation, which has been mainly fueled by worker dissatisfaction, has intensified the battle amongst companies in attracting and retaining available talent. This has led to some experts calling it the “Second War for Talent.”

Whether this is a completely new war or just the next stage of the same war, the stakes are the same—and they remain high. Companies that are unable to compete will find themselves at a massive disadvantage.

Thus, there is a significant need for companies and businesses to analyze the root, scope, and nature of what drives and maintains worker satisfaction. This in turn would allow them to develop the appropriate strategies in facing the underlying challenges that it brings about.

Here are the five major characteristics and features driving the war.

Companies need to understand that this is not a domestic war. The battlefield is not localized, which means that it is not just competing with local corporations and businesses, but also against foreign and multinational companies.

Improvements in internet technology have brought about the rise of remote work, now foreign competitors have access to domestic labor markets, allowing them to compete with local companies. A lot of workers are being enticed with higher wages and the flexibility of freelance and remote work.

This is especially devastating for companies in developing countries that can only offer standard wages and who are still stuck with traditional employment arrangements. Unless these companies reevaluate their existing policies and strategies on the matter, they will be unable to adequately address such a significant threat.

Our collective pandemic experience has shown that operating within an office space is not as indispensable to work as previously thought. Knowledge workers, in particular, can perform their jobs just as efficiently at home. In fact, some studies have found that the rate of productivity actually increased when workers were allowed to work remotely.

With the myth of office-centered work being dispelled, a lot of these workers will most likely now demand more flexibility as to their work arrangements. Instead of combating this rising trend, companies should explore the possibility of adapting to it by adopting remote-first solutions.

Wages and salaries have steadily increased over the years. This makes the battle for high-level talent very difficult for startups and new companies who don’t have sufficient funds to compete with more established corporations.

Addressing this issue requires companies to rethink their compensation strategy and look for alternative ways to attract new candidates and retain key employees.

The War for Talent is not just a recruitment battle. It is also a battle to retain existing employees and prevent losing them due to resignation or poaching attempts from other employers.

Companies need to learn how to balance strategies for offense (recruitment) with defense (retention). In fact, there should be more emphasis on developing an effective retention strategy for existing employees as losing on this front could be catastrophic.

Having difficulties with recruitment is one thing, but losing key talent and employees is a whole new ball game. The latter has the potential to completely disrupt important aspects of your company’s operations.

Younger people being idealistic is not an overgeneralization. Multiple studies have observed that Millennials and those belonging to Gen Z care more about corporate social responsibility (CSR). Workers want an emotional reason to be fulfilled with their work.

This means that most workers want to work for companies whose values, mission, and beliefs align with theirs. As Millenials and Gen Zs will comprise the majority of the world’s workforce in the future, appealing to this demographic is important. Hence, there is growing significance in formulating a plan to ensure that a company is able to align its workers with its vision and values.

Winning the war with equity

A Harvard Business Review article opined that participating in the recruitment war is inefficient. The article even goes as far as calling it a “mistake” and instead recommends that companies develop and invest in their existing talent.

Investing in talent, however, presupposes that a company, at the very least, is capable of acquiring decent talent. This can be an issue for startups that may not have the money to hire the necessary people even at entry-level rates.

Moreover, this investment strategy presupposes that a company has no retention problems. Otherwise, the investment in training and education would be all for naught if a worker would is easily poached by a rival or quits the company too early.

What is needed is a more holistic approach that addresses both facets of the problem. We believe that offering equity can do this. The right equity offerings can be a key aspect of a company’s recruitment and retention strategy.

So, how does equity address all the challenges presented by the War for Talent? From a recruitment aspect, offering equity allows startups and new companies to attract great talent by giving them a stake in its success—a stake that, in the future, might prove to be worth more than any high salary that a big company can offer. This also enables startups to altogether avoid participating in a salary bidding war with larger and more established corporations in recruiting workers and employees. Which is, of course, a war that it is bound to lose.

On the other hand, as a retention strategy, equity offerings help protect your employees from poaching and early resignations by incentivizing loyalty to your company. Most equity plans involve a vesting schedule which means that the promised award would only be delivered to the worker after staying a certain period of time with the company (also known as a worker’s vesting schedule). Early separation from a company could be discouraged by providing for the forfeiture of the equity award should the worker fail to reach the requisite service period. In addition, an equity award could also provide for the forfeiture of the award if the separation from the company is worker-initiated (except maybe for optional retirement).

Indeed, any recruitment and retention strategy would greatly benefit from the aligning effect of equity. Equity awards essentially convert workers and employees into part-owners of the company. Thus, offering and providing potential candidates and existing employees with a stake in the company facilitates the development of an owner’s mindset. Hence, instead of seeing themselves as another cog in the corporate machine, they will start to act and think like founders. This gives workers a stronger reason to join or stay with a company as a form of “investment.”

Upstock helps companies align and motivate their workers at a fraction of the legal costs normally associated with the creation of a great equity plan. Our offerings are also available in 70+ countries, making it a viable weapon in the War for Talent, wherever you may be fighting it. Our vision is to create a more equitable world through shared company ownership.

If you want to know more about how to gain an advantage in recruitment and retention with equity, sign up for a demo of our product here.