Achieving A More Equitable World With Worker Equity: Our vision for 30% worker-ownership by 2030 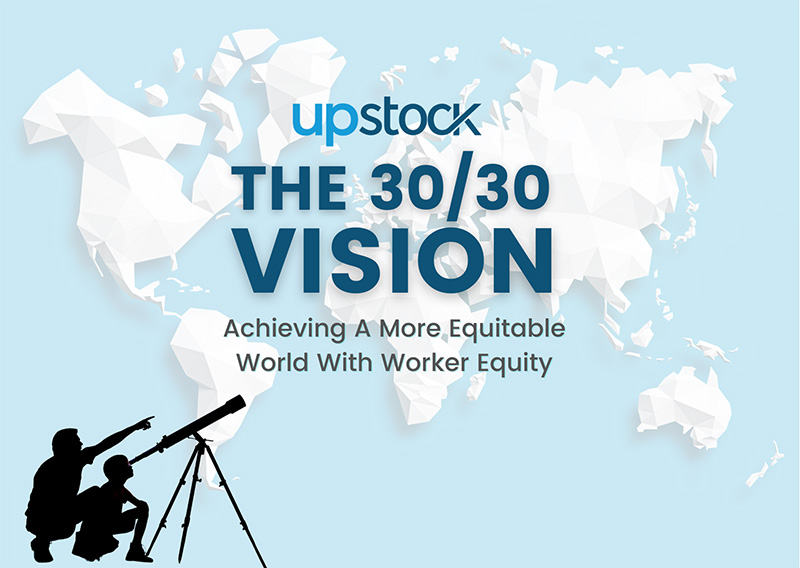 We believe that the world is moving toward a more cooperative form of capitalism. People of all income levels are finally having the opportunity to invest in their futures.

A report in 2018 revealed that the 26 richest individuals hold the same amount of wealth as the poorest half of the world combined. A UN World Social Report in 2020, observed that the gap between high-income and low-income earners has widened. The report noted that while “top salaries have risen dramatically,” worker compensation continues to stagnate despite improvements and increases in labor productivity.

Even in countries like the United States which boasts a vibrant middle class, the income gap between the 1% and everyone else has worsened. A 2021 article published in the Harvard Business Review found that the top 1% control the majority of business wealth in the US. When business ownership of the richest 10% is also accounted for, this number shoots up to as high as 90%.

These findings are unsurprising given the rules of corporate capitalism for the past few decades. Progress towards reducing wealth inequality has been painstakingly slow. Sadly, workers and laborers have had few opportunities to share in the fruits of their labor on the tree of corporate wealth.

Fresh perspectives have emerged which are aimed at exploring solutions towards a more equitable distribution of global wealth. The promise of “stakeholder capitalism” is once again gaining steam especially in the area of worker equity.

In the Harvard Business Review article mentioned above, experts found that by simply increasing the ownership stake of workers in businesses from 8% up to 10%, the average wealth of the poorer half of the American population would more than double.

With small businesses being the hardest hit during the pandemic, business ownership, as a form of wealth, is at its worst in terms of indicating the current level of inequality. By allowing workers to have a higher stake in the businesses they help build, a meaningful reduction of the wealth gap is truly possible.

The Harvard Business Review article also had another very significant finding. If we could just increase the rate of worker-ownership of businesses to 30%, Americans belonging to the bottom 50% would automatically experience a fourfold increase in wealth. The median wealth of workers without high school diplomas, for example, would jump from around $21,000 to $84,000.

Knowing all these benefits, cost becomes an important question to ask: how much would it take to substantially eliminate the wealth gap? Or, to put it more eloquently, how much is the cost of transforming and uplifting the lives of millions of people?

Surprisingly, the answer is not very much. In fact, for most of us, it would cost almost nothing.

For those belonging to the 90th to 99th percentile, there would only be an average decrease of around 1% of their net worth. The ultra-rich, on the other hand, just need to give up about 14% of their wealth. Multibillionaires would still be multibillionaires. Considering the massive benefits of worker-ownership, the financial costs are totally worth it.

In 2015, the UN made the reduction of global inequality one of its Sustainable Development Goals for its 2030 Agenda, and we at Upstock believe that greater worker equity will play a crucial role in its realization.

Indeed, achieving 30% worker-ownership by 2030 is world-changing. We would see workers and companies working together in pursuit of a common goal. By putting both workers and companies in the same boat, empathy and understanding between the two are enhanced as the success or failure of the other will also become theirs. Equity makes true alignment possible which leads to more concrete economic benefits. For instance, numerous studies would show that worker-owned companies are, on average, more productive and profitable than those that are not.

Meaningful progress towards this 30/30 vision will, admittedly, require massive and groundbreaking changes in government policy and societal beliefs and values. But this should not stop us from pursuing it with utmost passion and persistence.

When a famous German philosopher and economist called for the workers of the world to unite to overthrow the capitalist system, he probably failed to consider the feasibility of real and meaningful collaboration between labor and capital.

The middle ground, worker equity, shows that mutual cooperation is possible, demonstrating that capitalism has the potential to be uplifting, sustainable, and fair.

At Upstock we hope to spread the vision of 30% worker-ownership by 2030. We’re making Upstock’s Universal Equity available at a price and complexity point that is attractive to companies of all sizes. In the next decade, we aim to do our part to enable millions of companies to share ownership with their workers. Join us with today’s workers to do the best work of our lives, and create a more sustainable and stable future for us all.